Approximately 300 Prince George’s County residents, community, and business leaders (as well as elected and appointed officials) gathered on Saturday, June 15, 2013, for the Plan Prince George’s 2035 Town Meeting titled, “Where is Downtown Prince George’s?” The interactive town meeting was held at the University of Maryland’s Samuel Riggs IV Alumni Center and was also broadcast live on the internet. Utilizing wireless polling devices, participants were encouraged to vote on challenges and opportunities related to a wide range of land use topics.

The meeting was supplemented with table discussions to facilitate open dialogue among stakeholders from various parts of the County with diverse backgrounds. It educated participants on key planning issues and culminated by asking participants to select three top places for the development of a downtown in the County.

The majority (79%) of Town Meeting participants were in favor of the County annually targeting investment in two to three “downtowns”. When specifically asked to identify the top two locations that they felt best primed to become a real downtown, results showed a three-way tie with College Park/University of Maryland Metro, Prince George’s Plaza Metro, and Largo Town Center Metro, each receiving 21 percent of the votes. View these results in the table below: 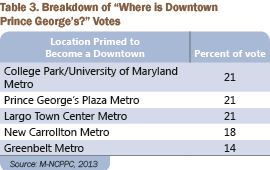 View a scalable graphic version of the results (SVG).